Read an Excerpt from Watch Me

The belief in a supernatural source of evil is not necessary: men alone are quite capable of all wickedness.
—Joseph Conrad 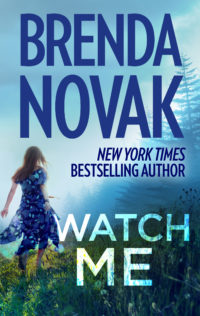 Sheridan Kohl lay in a heap on the ground, her clothes, her cheek, the entire left side of her body, wet from the moist earth. The taste of her own blood sat bitter on her tongue, but the fecund smell of the thick vegetation growing all around her reminded her of her childhood. She’d grown up in eastern Tennessee, in the small town of Whiterock.

Not that this was the type of homecoming she’d expected.

The scrape of a shovel let her know the man who’d attacked her was still close. So close she dared not move or even whimper.

After a few turns of his spade, his breathing grew labored, and she heard him grunt every so often.

Scrape…plop. Scrape…plop. The digging wasn’t easy, but it was rhythmic enough to tell her it was progressing. Although he wasn’t particularly tall, he was strong; she knew that already. Even after she managed to get free of the rope that had bound her wrists, she hadn’t been able to fend him off. Her determination to fight had only made him angrier, more violent. She was sure he would’ve killed her if she hadn’t ultimately gone limp.

She gingerly explored her top lip. It was busted, but that was probably the least of her injuries. Unless she angled her head just right, blood rolled down her throat, choking her. She could barely open one eye. And his fierce blows to her head had left her dazed, unable to think coherently. On some level, she knew she needed to get up and run now that he’d turned his attention elsewhere. But she couldn’t stand, let alone make a dash for freedom. It was painful just to breathe.

The promise of complete darkness and total silence hovered at the edge of consciousness. She longed to embrace it, to drift away and leave her broken body behind. But her best friend seemed to be standing at her shoulder, shouting: Get up, damn you! Don’t allow this, Sher. Gain the upper hand no matter what you have to do. Fight for your life! For a moment, Sheridan even wondered she was sitting in one of Skye’s self-defense classes back at the victim’s charity they’d started five years ago.

But then she felt the rain, light sprinkles hitting her parted lips, forehead, eyelashes. She was in the forest in the middle of the night, alone with a man wearing a ski mask.

And he was digging her grave.

The dogs, barking and jumping against the chain-link fence, woke Cain Granger from a deep sleep. He told himself it was probably just another raccoon or possum, and rolled over to go back to sleep. But when the racket didn’t stop, he realized the instigating factor could also be a bear. He’d spotted a couple of brown bears in the area not more than a week earlier; they seemed to be foraging closer and closer to the house.

“I’m coming,” he grumbled. Forcing himself to get out of bed, he yanked on a pair of jeans and some work boots. It was the height of the summer—too hot and sultry to bother with any more clothes, even in the mountains. A bear wouldn’t care whether he was fully dressed or not. But by the time he grabbed his tranquilizer gun and reached the dogs’ pen, he didn’t find a bear or anything else, at least in the immediate vicinity.

The dogs stopped barking, but they didn’t come toward him. All three Coonhounds stood rigid as statues, sniffing the air and pointing with their noses, as if they were tracking.

Cain frowned at this odd behavior, but he was too tired to do much about it. If the bear wasn’t close enough to cause any harm, he didn’t care to mess with it. Drugging and transporting such a large beast was a major feat; he knew because he worked for the Department of Fish & Game and did that type of thing for a living. “I’m going back to bed,” he told the dogs and started toward the house, but Koda, his oldest and smartest hound, gave a warning growl that brought Cain up short.

Instead of going back inside the house, Cain opened the gate and all three dogs raced toward him, shimmying and shaking but not barking because he’d already chastened them for making too much noise. “What’s up?” he asked, giving them each a good pat. They generally loved his attention, reveled in it as long as possible, but tonight they tried to slip between him and the fence so they could head out into the forest.

“Hang on.” He was planning to put them all on leashes, but Koda didn’t want to wait. The black and tan bounded to the edge of the clearing, glanced back for permission and whined to achieve it.

“If it’s a bear, you’ll get your ass kicked,” Cain told him, but Koda wasn’t stupid enough to attack a bear. Not on his own. The dogs would corner and hover until he arrived—and hopefully they’d be quick enough to get out of the way if a bear charged them.

“Fine, do it,” he relented with a wave, and that was all it took to send his hounds racing out ahead of him.

Taking a flashlight from the shed, Cain jogged behind, using the noise they made as a guide.

It wasn’t long before the tenor of their barking changed: they’d found something.

Picking up his pace, he used the flashlight to help him avoid obstacles. The moon hung full and bright overhead, but it was beginning to rain, and it didn’t hurt to have the extra light when he had to weave through the shadowy trees. A lot of stumps, pinecones and broken limbs littered the ground. But there weren’t a lot of people in these mountains. Which was why Cain loved them so much.

The dogs grew louder, more excited as he neared the far corner of his property. Whatever they had was on his land.

Was this some sort of joke? The boys in town, whom he occasionally had a few beers with, liked to pull pranks….

“Take it easy.” He spoke low in his throat, warning the dogs to calm down and back off. Reluctantly, they inched away—and that was when Cain realized it wasn’t an inflatable doll or a mannequin or any other inanimate object. It was a woman.

“What the hell?” Whoever she was, she’d been badly beaten. She wasn’t moving, wasn’t responding in any way to the noise and activity around her.

Cain used his flashlight to search the surrounding trees. He appeared to be alone with his find, but the existence of a discarded shovel and a partially dug hole not more than a few feet to his right told an unsettling story. From the looks of it, someone had murdered this woman and brought her out here to bury her. No wonder his dogs had been going crazy.

“Son of a bitch.” He stretched his neck as he tried to process the gruesome discovery. He should’ve come sooner. Maybe he could’ve saved her. Setting his gun on a nearby log where he could reach it in a hurry if need be, he issued another command to keep his hounds out of the way and knelt beside her. Her limp wrist felt small and fragile in his hand. Thick black hair covered her face; he could see, even in the darkness, that it was matted with fresh blood.

What must she have gone through? Who was she? And why had this happened?

Cain was so sure she was already dead the faint butterfly-like beat of her pulse surprised him. But it was there—thank God, it was there.

Breathing a sigh of relief, he silently begged her to hang on while he tied his gun to Koda’s collar so the black and tan could drag it home.

He had to get this woman some help. Fast. But there was no time to put her in his truck and drive seventy miles to the closest hospital. She’d never make it.

Lifting her as gently as possible, he carried her to the clearing that served his house and animal clinic. He’d have more room for her in the clinic, an easier place to wash her up. But as clean as he kept it, he couldn’t imagine putting a woman where he’d been nursing sick and injured dogs, cats, horses and the odd coyote, deer or bear. Opting for the house, he shoved the front door open with his shoulder, then weaved through the furniture to the spare room, where he laid her on the bed.

Her head lolled to the side, smearing blood on the bedding, but the mess didn’t matter. He’d never seen anyone so close to death. Except one of his stepbrothers.

This couldn’t end the same way.

Ordering the dogs who’d followed him in to stay out of the house, he hurried to the living room and called the oldest of the two stepbrothers he had left, who happened to be the only doctor in town. Then he tried to contact Ned Smith, Whiterock’s chief of police, but the dispatcher didn’t know where to find him.

“Want me to wake Amy?” she asked, offering him an alternate.

Cain didn’t even hesitate. Amy was also a cop, but she was Ned’s sister—and Cain’s ex-wife. “No,” he said. He definitely didn’t want Amy to land in the middle of this. She had no experience with violent crime. Neither did the other two officers on Whiterock’s small police force, which is why he didn’t suggest the dispatcher continue down her list of available officers. Cain wasn’t sure Ned would be any better, but he was chief of police. “Just track down Ned and tell him to call me. Immediately.”

Relieved to think that help was on its way, he returned to the spare bedroom. “You’re going to be okay,” he told the woman lying inert on the bed. That was when he carefully smoothed the tangled hair out of her face, wiped away the mud and blood–and realized, with some shock, that he knew this woman. It’d been twelve years since he’d seen her. But he’d slept with her once. Right before she’d gone to Rocky Point with Jason.