Read an Excerpt from That One Night

He knew she was coming. She saw his gaze flick over her in the mirror, guessed he’d been expecting her—and felt like a complete fool. Especially because the guy sitting next to him at the bar was watching her far more eagerly, and she knew she wouldn’t sleep with him if he was the last man on earth. 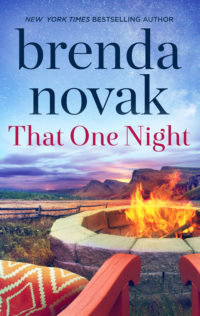 Relax. Pretend you’re someone else, someone chic and bold and…—she gulped—…easy.

“Hi,” she said, sliding onto the empty stool next to him. She’d been planning to order a drink to make her approach a little less obvious, but her timing wasn’t good. The bartender had turned around and was busy fiddling with the television in the corner.

She glanced forlornly at his back, then braved a smile at the man she hoped would father her child.

He considered her for several seconds before responding. “Hi,” he said, but he didn’t return her smile or swivel toward her or do anything else to make himself more approachable, and it stung Delaney’s pride enough to make her sit up and pretend to have confidence in what she was doing.

“You live around here?” she asked, keeping her focus strictly on him because the man in the red flannel shirt kept leaning forward to entice her with a battered grin. He may as well have been holding up a sign that read, “Take me,” but no matter how blatant his interest, Delaney wasn’t buying. She’d do the artificial thing first.

Now that she was so close, she could tell his eyes weren’t entirely brown. Gold flecks made them appear almost amber, and there was something inside them that seemed more world-wise than Delaney would have expected for a man who looked so close to her own age. After only a few seconds in his company, he reminded her much less of Ricky Martin than he had at first. He didn’t possess the same easy smile or laid-back attitude. This man came off as intense, shrewd, even unforgiving, which added significantly to Delaney’s anxiety.

I don’t have to worry about his ability to forgive. I’m never going to see him again.

His gaze fell to the cleavage revealed by her dress, and she instinctively moved to cover herself. “I live a couple of hours from here,” she responded automatically, then wanted to kick herself for being so truthful. The less he knew about her the better.

“Oh, really? Where?” Unless it was her imagination, his voice revealed a spark of interest.

“It’s a town called New Meadows, to the north of here,” she lied, picking a town on the opposite side of Boise.

“Oh.” The spark died, and an awkward silence ensued, during which Delaney curled her fingers into her palms and thought about all the ways she was going to torture Rebecca for pushing her into this. If not for her, Delaney would be safe at home dreaming about a baby…and doing absolutely nothing to make it a reality.

That thought sobered her enough to keep her where she was. One night, one man, remember? No big deal.

“What can I get for you?” the bartender asked, finally making his way over.

Delaney ordered a club soda and opened her purse to get her money out, but ‘Ricky’ surprised her by paying for it. “What are you and your friend doing in town?” he asked once her drink had been delivered.

Delaney took a sip and focused on his hands, which were circling his beer glass. They were big, nice hands. And he wasn’t wearing a wedding ring.