Read an Excerpt from Once Upon a Christmas

including Brenda's Just Like the Ones We Used To Know 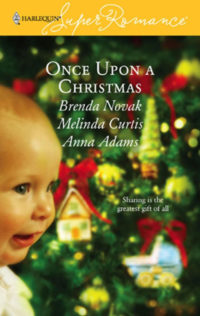 Seeing Kayla’s teacher smile expectantly as she held the door, Angela swallowed hard, straightened her spine and walked into the 6th grade classroom. Late in the afternoon of the Friday before Christmas break, it was empty of students, yet it still smelled of pencil shavings and chalk, which evoked pleasant associations. Growing up, Angela had been a good student. But the girl she’d taken in a year earlier was struggling in school, in life. Angela had become Kayla’s caregiver so late, could she really make any difference?

That was the big question and had been from the beginning. Angela feared she couldn’t. And she feared Kayla’s teacher had called her in, once again, to let her know just how badly she was failing.

Battling the helplessness that engulfed her so often lately, Angela perched uncomfortably on the chair next to Mrs. Bennett’s battle-scarred desk—she knew her place in this room well–and smoothed the skirt of the designer suit she’d worn to work that morning.

“I’m sorry to bother you again,” the teacher began, peering at Angela over the top of a pair of bifocals.

Angela pulled her heavy trench coat tighter and forced a pleasant smile. “It’s no problem. You know I want what’s best for Kayla.”

“I want the same thing.”

“Of course.” They just approached it differently. Mrs. Bennett could be stern and rather severe. She often indicated that she felt Angela was letting pity for what had happened in the past interfere with good old-fashioned discipline. But Angela had been a foster child herself—had spent several years living in the same house as Kayla’s mother, in fact—so she understood Kayla’s unfortunate situation well. Besides, this was Angela’s first attempt at parenting. She was twenty-nine, but she wasn’t married. Maybe she wasn’t the best person in the world to finish raising Stephanie’s daughter, but before Stephanie’s mother died, she gave Angela guardianship because she was certainly better than Kayla’s other options.

“What seems to be the problem?” she asked, deciding to put the question out there and get it over with. “Isn’t Kayla turning in her assignments?”

Angela knew Kayla finished her homework because they did it together. But only last Wednesday Mrs. Bennett had informed Angela that it had been two weeks since Kayla had turned in a single paper. Angela had been shocked and worried, of course, but what made the situation more mystifying was the fact that Kayla couldn’t tell her why she wasn’t turning in the work.

“She’s improving there,” Mrs. Bennett said. “I’d like to see her test scores come up, but that’s another issue. I called you in today because I wanted you to see something she’s written.”

Written? The crisp Denver winter settled a little deeper into Angela’s bones. Kayla was generally excluded from the tight cliques of the other girls. The fact that she kept to herself and rarely associated with kids her age had been the subject of yet another parent/teacher conference. So…had Kayla finally decided to get even with the ever-popular but cruel Barbie Hanover, who’d stolen her notebook and shown Jordan Wheeler the poem she’d composed about him?

Angela half-expected Mrs. Bennett to smooth out a note detailing Barbie’s lack of good qualities or some other manifestation of the intense humiliation she’d caused Kayla. But Mrs. Bennett presented her with what looked like a regular English paper. And, even more surprisingly, written right across the top in red ink was a big fat A.

It was probably Kayla’s first A, which would have been reason to celebrate. Except Mrs. Bennett’s sober expression indicated that Angela should still be concerned.

“She wouldn’t put her last name?” Angela asked in confusion.

She turned her attention back to the small, cramped writing.

I suppose you want to hear that Christmas is my favorite time of year. That’s what everyone else says, right? There’s candy and presents and parties. There’s baby Jesus and Santa Claus. Even for girls like me. So why am I finding this stupid paper so hard to write? I should just copy someone else, someone normal. I can hear the people all around me. I want this… I want that… I’m getting a new cell phone, a new TV, a new dress. Barbie sits next to me and wants an I-pod. Not any old I-pod. It has to hold about a billion songs and play videos, too. Nothing but the best for Barbie, and we all know she’ll get it. Her friend Sierra is asking for a snow board. That’s not cheap, either, so I wouldn’t ask for it even if I wanted it. But Sierra’s parents are rich, which means she’ll be pleasantly NOT surprised to find it under the tree on Christmas morning. They’re lucky. Not because they get what they want, but because the want what they get. A boy I know wants a new basketball. He’s—the next part had been heavily erased and written over—He’s even luckier.

Was Kayla writing about Jordan at this point? Angela wondered. She thought so. He was the only person not named, which was significant, and there was emotion behind all those eraser marks.

Tyler Jameson is asking for an X-Box. Tyler was Jordan’s best friend, which seemed to offer more proof that she’d segued from the boy she liked to his best friend. He’s always making a list of the games he wants—at $60 a piece. His Christmas isn’t going to be cheap.

Money. Cheap or expensive, I wish it could buy what I want. I wish I could be satisfied with an I-pod or new clothes, or even getting my ears pierced. But I don’t care about any of that. I want something Santa can’t pull out of a sack. I want a real last name. The kind that came before I did. Not, “We’ll just call her…” I want to know what my name should’ve been. I want to know who I belong to. I want my father. Then I could ask him why he loved my mother enough to make me but didn’t love me enough to stay.

If I knew him, I think even I could be happy with an I-pod.

By the time she finished, Angela’s throat had constricted and she doubted she could speak. She didn’t know what to say, anyway. As tears filled her eyes, she felt Mrs. Bennett’s hand close over hers.

“Heart-wrenching, isn’t it?” she said softly.

Surprised at the empathy in the teacher’s voice, Angela nodded. Evidently Mrs. Bennett wasn’t quite as stern as she appeared, at least not all the way through. But Angela wasn’t sure why she’d called her in to have her read this essay. Angela couldn’t give Kayla what she wanted. Kayla’s father didn’t even know she was alive—and, because of what had happened thirteen years ago, Angela couldn’t tell him. This letter only made her feel worse because now she knew that nothing she could buy Kayla for Christmas would make the girl any happier.

“She knows what really matters.”

Angela sensed that Mrs. Bennett had more to say, but the teacher wasn’t quite as direct as usual. She seemed to choose her next words carefully.

“You’ve already shared with me the situation that motivated you to take her in. Have you heard from her mother lately?”

“Not for a few months.” The last contact Angela had had with Stephanie was the day she’d learned that her old friend was prostituting in order to get the money she needed to support her drug habit. Angela had tracked her down and tried to get her off the streets. She’d planned to put her in another drug rehabilitation center. But Stephanie spent one night with them, stole all the money out of Angela’s purse and disappeared before she and Kayla could get up in the morning. Without so much as a good-bye or an “I love you” for Kayla.

The incident had upset Kayla so much that Angela had decided she wouldn’t get involved with Stephanie again. She had to let go of the mother in order to save the daughter. Which was why she was selling her house. She couldn’t have Stephanie dropping in all them all the time, disrupting Kayla’s life. Kayla had refused to come out of her room for nearly three weeks after the last visit. “You’ve never mentioned her father,” Mrs. Bennett said. “Do you know anything about him?”

“Do you think a little research might help? Even if the circumstances surrounding Kayla’s birth weren’t good, the information might assuage the terrible hunger I sense in her through these words—and in other ways.” Angela sensed that hunger, too. But telling Kayla about her father would start a chain reaction that could disrupt, possibly ruin, a lot of lives. Besides, Angela had promised Kayla’s late grandmother—the woman who’d provided a foster home for her after her parents died—that she would never tell.

“Recently? Because now that we have the Internet—”

“It was a one-night stand. Her mother didn’t even know his name.” Another lie, but Mrs. Bennett seemed to buy it.

“Okay, well, we’ll continue to do what we can to make Kayla feel loved, won’t we? Thanks for coming in. I hope you both have a wonderful Christmas.”

“Same to you,” Angela said and stood as if nothing had changed. But a thought she’d had several times in the past was stealing up on her again. What if she were to take Kayla back to Virginia City for a visit? It had been thirteen years. Surely, Matthew Jackson would never guess after so long. It would give her a chance to assess the situation, determine where Matt was now, what he was doing–and whether or not there was any chance he might be receptive to such a shocking secret.