Read an Excerpt from More than Words: Stories of the Heart

Noelle had trouble finding Harrison’s apartment. By the time she arrived, it was nearly 1 o’clock and raining again. Opening her compact umbrella, she stepped out of her Volvo and hurried across the puddle-ridden lot, moving as fast as she dared in high heels. It hadn’t made sense to go home and change. She’d been too excited to get Jeremy. 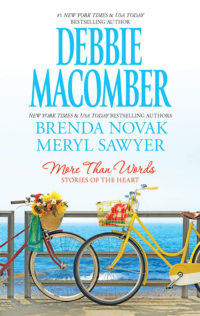 Jeremy… She liked that name. She’d been searching her brain for a good middle name to go with it ever since Harrison had mentioned he’d let her choose one, and had yet to come up with anything. But she was sure she’d have better luck once she had a chance to get to know her baby.

Her baby… She could hardly believe the twist of fate that had given this opportunity to her. Or was it an opportunity? Was she being stupid to get involved? She didn’t think so. Maybe it would be different if she could have more children of her own, but Steven had made that impossible.

A little damp and definitely cold, she lowered her umbrella before knocking softly on Unit #31. She waited several long seconds, then knocked again. Finally, she tried the door and found it unlocked.

“Harrison?” she called, poking her head inside.

The thickness of Harrison’s voice indicated that he’d fallen back asleep, just as she’d suspected he might.

“Sorry to barge in on you,” she said, “but you didn’t answer my knock.” Leaving her umbrella on the stoop, she stepped inside a utilitarian family room and kitchen area lit only by the flicker of an old console-style television. A bike stood in the corner, and some shelves held several books, a few photographs and the memory box she’d made.

Harrison was lying on the couch, wearing socks, a T-shirt and faded jeans and holding the baby. “I thought I was dreaming.” He yawned and scrubbed a hand over his face, then his gaze ran down to her feet and back up again.

“I wanted to let you rest.” She stared down at the baby in his lap and felt her pulse leap. “Looks like Jeremy’s doing okay.”

“You say that as though he’s sweet. He’s been a nightmare.”

A flash of white teeth told her Harrison wasn’t really upset, and Noelle couldn’t help returning his smile. For someone who didn’t want children, he’d taken his role as father pretty seriously. His apartment was in shambles, but from what she could see, the mess was all baby-related.

The television changed colors, allowing Noelle a better glimpse of Harrison’s clean, strong features. Stubble darkened his square jaw, but the thick blond hair sticking up on his head and his sleepy blue eyes gave his face a disarming, boyish look. Jeremy could certainly have inherited worse genes, she thought. If he took after Harrison, he had every chance of being tall, well-built and too handsome for his own good.

“Did you make it to the funeral today?” she asked. She was eager to get Jeremy in her arms, but she was afraid, too—afraid she’d melt down the moment she touched him. Sometimes she felt completely recovered from the loss of her baby a year earlier. But there were other times when it seemed as though the passing months had only camouflaged the hurt.

Harrison shook his head. “I would’ve been really late, and I had Jeremy by then. I decided it might be better for Lynnette’s family if we said our own prayers for her and Tyler—

“Lynnette’s mother named the other baby.”

“Anyway, I decided it might be better for them if we just faded away.”

“It’s not that so much. Her mother suffers from depression and isn’t doing well, and her sister’s involved in a custody battle for her own child. They can’t do anything for Jeremy. I was afraid it’d just make them feel worse to have a reminder that the entire situation didn’t end with Lynnette’s and Tyler’s death.”

Noelle was mildly surprised by Harrison’s sensitivity. Lynnette had tried to trap him, yet he was doing his best to shield her family from the consequences?

“Can I hold him?” she asked at last, unable to wait any longer.

“Sure.” Harrison sat up and motioned to the space beside him. “Have a seat.”

Noelle could feel his residual body heat when she perched on the couch. But that had nothing to do with the warmth that rolled through her when he handed her the baby. This warmth came from somewhere deep inside, like a candle burning in her heart.

Closing her eyes, she rubbed her lips across the baby’s cheek. He smelled so good, so…familiar. She’d known this moment might be difficult for her. But she’d had no idea that Jeremy would evoke such vivid memories of the day she’d had her own baby. Although she’d held Austin only briefly, her arms had ached for him ever since. And now, after so long, if felt almost as if she had him back again.

She could sense Harrison watching her and tried to say, “He’s so soft,” to cover the depth of her reaction. But she couldn’t speak. Tears welled in her eyes almost instantly, and her chest constricted until she could scarcely breathe. Her only escape was to bury her face in the baby’s terrycloth sleeper before she came apart.