Read an Excerpt from Dear Maggie

Nick propped an elbow on the partition surrounding her desk and leaned on it. “Want me to help you stay awake?” 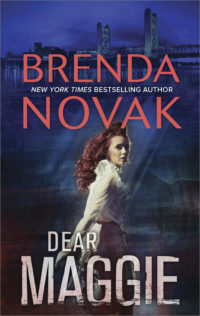 Yawning, she supported her head with her hand. “I don’t think anyone could do that.”

This statement elicited a wolfish grin. “Maybe I’m better at keeping a woman’s attention than you think.”

Maggie didn’t doubt his capabilities. It was his potential for late night entertainment that scared her. “What did you have in mind?” she asked hesitantly.

“Like checkers or something? I’m afraid I don’t keep board games in my desk, and frankly I’d be a little surprised to find them in yours.”

He chuckled. “I was thinking of something like Truth or Dare. It takes no props and can be very interesting, depending on who you’re playing with.”

Maggie rolled her eyes. “I’d be crazy to play something like that with you.”

“Why? Have a few skeletons in your closet?”

He scowled. “Eating coffee grounds is something a twelve-year-old would think of. I can tell you haven’t played this game for a while.”

“No, but I can think of a lot more interesting things to have you do than eat coffee grounds.”

Maggie felt an unexpected tingle go up her spine at the thought of what some of those things might be. Don’t even go there…

“I think that might be the problem,” she admitted.

“Why should I trust you? I barely know you.”

He pushed away from the partition to steal a chair from the cubicle next to Maggie’s so he could sit down. “That’s the beauty of this game. It will help us get to know each other. Come on, I’ll let you go first.”

Maggie considered the six-foot something length of him folded in the chair beside her, long legs stretched out in front of him. Where was he going with this?

Wherever it was, she wasn’t sleepy anymore. She had to give him points for effectiveness.

“Okay,” she said, unable to resist the opportunity to have him at her mercy, “truth or dare?”

He pursed his lips and held her gaze. “Truth.”

“Why did you ask me out a couple of weeks ago?”

“Because you’re beautiful and driven and a little shy. I like the combination.”

Maggie tried that on for size. It was a far cry from some of the things she’d been called in high school. Even though twelve years had passed since those days, sometimes it was hard to rid her head of the echo. “Wow,” she said. “Okay. Maybe this game is going to be fun.”

He laughed. “Except that now it’s my turn. Truth or dare?”

Maggie tucked her hair behind her ears, stalling. Truth was always safer, wasn’t it? “Truth.”

“Why did you turn me down?”

He cocked an eyebrow at her. “You said yourself you barely know me. How do you know what type I am?”

“What does that mean?”

“And you have a wall of pictures to prove it. Your point is?”

“I’m not into the type of relationships you are.”

He stiffened in surprise. “What kind of relationships am I into?”

“I’m just saying that you’re probably used to doing certain things with the women you date, and…and I’m really not that type, and…um…never mind. Your turn’s over. Truth or dare?”

“How many women have you had sex with?”

“I think the answer to this question will explain the type of relationships you’re into.”

“Well, I’m not as reckless as I used to be, and I don’t think the distant past should count against me.”

“Just answer the question. This was your idea, remember?”

“Come on. Let’s limit it to the past three years or something. I’m not the same now as I was then.”

“Okay. How many in the past three years?”

“Maybe in the past three months,” she grumbled.

“Again? What a chicken.”

Maggie folded her arms across her chest. “You’ve chosen truth every time yourself.”

“Okay, fine. Answer this: if you did agree to go out with me, where would you want to go?”

“Do I have to be practical?”

“No. That’s the beauty of this game. The only rule is that you tell the truth.”

“Okay. Hawaii would be nice.”

Maggie gulped, envisioning a long romantic getaway with the dangerous Nick Sorenson. “I was only teasing. I’d like to go water skiing at Lake Folsom—an all day event. I haven’t been on a pair of skis since college. But you probably don’t own a boat.”

“I could always rent one.”

Maggie shook her head. She wasn’t going to fall for it. Nick may have charisma, in spades, but he had no f.p.–father potential–and f.p. was the only thing that mattered anymore.

“After that last question, I think I’m going to choose dare. I think I’d rather eat coffee grounds than enumerate my past exploits.”

Maggie tapped her lip. “Let me think.” There were a lot of things she’d like to see Nick do–at this hour, having him take off his shirt so she could see his chest sounded pretty appealing, but the fact that she’d even think of it told her she was getting punchy. “I dare you to sing me a song,” she said at last.

He made a face. “Without music?”

She smiled. “I’ll let you choose.”

He fiddled with the tuner and finally settled on a song by Savage Garden called “Deeply Madly Truly.” His voice wasn’t half bad, but it was the way he looked at her as he sang, and the meaning behind the lyrics, that made an impact.

“Actually, I think that backfired,” she admitted when he finished.

He raised his brows. “You liked it that much?”

“I liked it a little,” she grudgingly admitted.

“Well, since I was such a good sport about embarrassing myself, maybe you’ll trust me enough to chose dare this time.”

“Okay, dare.” Maggie squeezed her eyes shut, knowing she wasn’t going to like what was coming, but was surprised when Nick said, “I dare you to dance with me.”

“Here?” she asked, staring around them. “We can’t dance in the office. There’s a security guard downstairs monitoring the closed circuit televisions. He’d laugh his rear end off.”

“I doubt old Ed is awake enough to even notice. We’re the only ones here.”

“There’s at least half a dozen others–”

“–buried in the offices lining the perimeter. They won’t even notice.”

“They could poke their heads out at any time.”

“I don’t think you’re worried about that. I think you’re scared of me. You have a problem with fear, you know that?”

Maggie did know that, but she wasn’t about to admit it to Nick. “I work nights. I’m not afraid of anything.”

“Then dance with me.” He scanned radio stations until he found one playing a slow ballad and turned to her expectantly.

What was Darla going to say about this? Maggie wondered. For keeping her distance from Nick Sorenson, she was sure getting awful close. “A slow dance?” she asked.

“Would you rather it be fast?”

Maggie considered her lack of experience in that regard and shook her head. “No.”

Standing, she took a deep breath. The police scanners and their accompanying static left a lot to be desired as far as atmosphere, but something told her she was going to like being in the circle of Nick’s arms regardless of what was happening around them.

Maybe she’d be less affected if she kept a foot or so of space between them, she thought, but Nick quickly dispensed with that possibility when his hands slipped around her waist and pulled her close. Maggie caught her breath and tried not to notice the solid chest pressed against her breasts, the thigh muscles that played against her legs as they moved slowly to the music.

“Relax,” he murmured, and the moment she did, he settled her even closer. “See, this isn’t so bad, is it?”

Maggie could only shake her head. Her heart was beating too hard to speak. The smell of cotton and clean male made her want to bury her nose in Nick’s neck. Her fingers itched to find their way into his hair. How had he done this to her in the process of one night?

“I’m not into casual sex,” she suddenly announced.

He stiffened for a moment, probably in surprise, then said, “Good. Neither am I.”

Maggie didn’t know where to go with that. She’d expected him to tease her about her prudish stance, or to play the innocent and pretend he didn’t have a clue why she’d bring that up at this particular moment, but his answer seemed as honest and straightforward as her declaration had been. So she relaxed and simply let herself enjoy the dance.

As the song ended, he pulled back to look into her face. “Truth or dare?” he asked.