Read an Excerpt from Take Me Home for Christmas

Sophia DeBussi’s husband was gone. As in…disappeared. Nowhere to be found. At ninety feet, the Legacy was a sizable yacht—Skip never bought anything except the very best—but not so sizable that a full-grown man could easily be overlooked. The six-member crew had just helped Sophia and her thirteen-year-old daughter scour every inch of the boat. 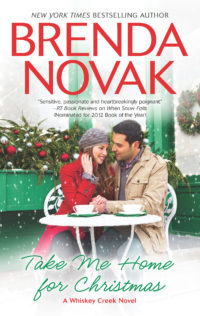 Other than his cell phone, which he wasn’t answering, Skip’s things were where they should be, but he was not.

Holding back her long hair, Sophia squinted against the sunshine glinting off the water, trying to see the coast of Brazil a few miles to starboard. Could her husband have gone for an early-morning swim and some how reached land?

That was a possibility, but it was a remote one. Why would he go off on his own? It was too windy to enjoy the beach today. And although he traveled all over the world for business, she’d never heard of him meeting anyone in Rio de Janeiro.

Besides, he’d planned this trip for their thirteenth anniversary because he wanted to spend quality time as a family. She couldn’t imagine he was working, not when this vacation was supposed to be about starting over, about saving their troubled marriage. He’d said he wouldn’t take one call. If he’d made that promise just to her, maybe she wouldn’t have relied on it. He’d said such things before and hadn’t followed through. But he’d also promised their daughter, and he and Alexa were very close.

Sophia gazed down at the water itself. Had he fallen overboard and drowned in the choppy Atlantic?

That thought led to a surge of relief. It was macabre to wish anyone dead, but only if Skip was gone for good would she ever escape him. She’d lived with him long enough to know he’d never willingly let her go.

He’d said as much.

The moment Alexa came to the railing to stand beside her, guilt replaced the relief she’d been feeling. Her poor daughter might have lost her father. How could she be happy about that?

Sophia put an arm around her child’s thin shoulders. “I don’t know, sweetheart.” She kept going over the past twenty-four hours in her mind, but could point to nothing out of the ordinary. Skip had gone to bed with her last night at eleven, as usual. He’d demanded sex, as usual. If he was around, he insisted on some sexual favor at least once a day. She was pretty sure he slept with other women when he was traveling, especially since he was often gone for a week or longer. But she never tried to check up on him. She just did what she had to when he was home to keep the peace, to survive. She knew how he’d act if she refused him. Even if he didn’t strike her, he’d sulk for days.

Except for the embarrassment of having to tell everyone, including their daughter, that she’d tripped and fallen into a door or slammed on her brakes and hit the steering wheel, she would’ve hated the sulking even more. Sometimes it lasted far longer than the bruises.

Alexa wiped her wet cheeks. “You really don’t remember when he got up this morning?”

They’d already been over this. Sophia didn’t remember. She didn’t rise as early as he did. It wasn’t as if he’d allow her to have a job. On a school day, she typically went back to bed after Alexa left, staying there until ten or so. Then she’d get up slowly, work on maintaining her beauty, which was all-important to Skip, and drink away the rest of the afternoon. Alcohol was the one thing that seemed capable of dulling the disappointment, not to mention the boredom, she lived with on a constant basis.

But it also gave him a club to use when he needed it. I thought I was getting something special when I married you. You were someone, remember? The mayor’s only child. The most popular girl in school. Now look at you. You’re nothing but a lazy drunk.

She tried to shove those hateful words into the back of her mind, where they resided. They made her crave a gin and tonic, but it was too early for that. She couldn’t have one, anyway, she reminded herself. Not only had she just spent thirty days in rehab, she’d promised Skip, as part of their “starting over,” that she’d really quit the booze this time. He’d threatened to have her committed to a mental institution like her mother if she didn’t. She wasn’t sure what he’d use to make her seem crazy, but he’d figure it out. Her mother’s condition, the fact that there was mental illness in the family, definitely wouldn’t work in her favor.

Sophia pulled herself out of the whirlpool of her thoughts. “He didn’t wake me, honey. I’m sorry. He didn’t tell me he was leaving, either. I would’ve remembered.”

“Are you sure? He says you forget a lot. That you’d live in a bottle if you could.”

He often criticized her to Lexi. He was the dazzling father who swooped in bearing outlandish gifts. The parent who’d promised her a Porsche for her sixteenth birthday. He never had to raise his voice to insist she do chores, finish her dinner or improve her grades, because he wasn’t around long enough. “I’ve quit drinking,” Sophia said softly. “That’s why I went away, remember? Why you had to stay with Grandma and Grandpa.”

Alexa didn’t pursue the old argument. She was too bewildered by her father’s disappearance. “This is just so…weird.”

“It is weird.” Sophia could tell that the captain and his mates agreed. She’d heard them asking each other if anyone had seen Mr. DeBussi on deck in the wee hours. No one had. No one had heard him, either. But with the engine chugging away and the waves splashing against the sides of the boat, would anyone notice if he fell overboard?

“I keep thinking he has to be here somewhere.” Dressed in cut-offs and a white tank, Alexa leaned on the railing as her troubled eyes ran over the deck, the bar, the stairs going below. “I’m so worried.”

Sophia didn’t want her to have to accept the worst quite yet. She didn’t want her to suffer at all. Alexa was the only reason she’d remained in her loveless marriage. Skip had told her she’d never see her daughter again if she left, and she believed him. He had the support of a rich and powerful family who lived in the same small town they did. With her own mother diagnosed with schizophrenia and her father dead, she had no one. “He might turn up.”

A fresh tear rolled down Lexi’s cheek. “But you heard the captain. He said there’s no way Dad could’ve reached shore. No one could swim that far.”

The captain would’ve been right had he been talking about anyone else. But he didn’t know Skip, not like she did. Skip could do anything he set his mind to. Sophia had never met such a strong-willed individual. Or such a controlling one.

She pulled her daughter into a hug. “We’ve contacted the U.S. Consulate, and they’ve called the police. We’ll be docking at Rio to wait while they check the city and the beaches. We won’t leave without him. Let’s not give up hope too soon.”

Alexa’s head bumped against Sophia’s chest as she nodded, but she was obviously struggling to believe those measures would do any good. She couldn’t picture her father jumping over the side in the middle of the night and swimming for shore—and neither could Sophia.

The captain approached. “I’ve secured a slip at Marina de Gloria, Mrs. DeBussi,” he said. “We should be in port in less than thirty minutes.”

His nod had the same effect as a salute. He turned away, but then he paused.

“Is there anything else?” she asked.

A sense of foreboding chilled her despite the ninety degree weather. “About…”

“The police. When I spoke to them on the radio, they…they asked me if…” He cleared his throat as his eyes flicked to Alexa, and she nudged her daughter toward the stairs.

“Lexi, why don’t you go below and check our bedroom one more time, okay? Make sure everything of Daddy’s is there, even his shaving kit.”

“We know it’s there,” she protested.

Sophia gave her another little push. “Check again, will you?”

Reluctantly, her daughter headed to the stairs, casting a frown over one shoulder before she disappeared from view.

“What is it, Captain Armstrong?” Sophia asked.

“They had questions about your marriage, Mrs. DeBussi. If I’ve ever seen the two of you fight, that sort of thing.”

He hadn’t seen them fight. No one had. Skip kept up appearances at all costs. His reputation as the man who had everything meant more to him than something as malleable as the truth. He never grew violent when someone else was around, and that included Lexi. If he got upset, he simply punished Sophia later.

But anyone who was astute could no doubt feel the tension. Sophia was terrified of him. Even when he wasn’t overtly abusive, she endured many small but vicious reprisals.

“And you told them…what?” Her heart thumped so loudly she was afraid he could hear it. Skip wouldn’t like this intrusion into their personal lives, so why had he left her vulnerable to it?

“That I don’t know anything about your private life. But…I want to reassure you that even if I did, I wouldn’t speak of it.”

She found his loyalty comforting, especially because she would never have taken it for granted. She barely knew him, had hardly ever spoken to him. It didn’t matter that he was old enough to be her father, or that he was married himself. Her husband was too jealous. Any interaction would’ve risked the captain’s job.

“You’re welcome. I have the utmost respect for you, Mrs. DeBussi. But…”

He lowered his voice. “You should be prepared. They will ask you the same thing.”

Suddenly she grasped why he was telling her this. “You don’t mean… They don’t think I might’ve harmed Mr. DeBussi?” The irony of anyone suspecting her of hurting him almost made her laugh.

“They have to rule out that possibility.”

She could understand why, of course. But how would she convince them? Although the U.S. Consulate was acting as a liaison, she’d be dealing with foreign police; she couldn’t even speak their language. What if they arrested her?

Her face must’ve betrayed her panic because the captain took her elbow and led her to a chaise. It was nothing he’d risk doing in her husband’s presence, but she was grateful for his kindness.

“They won’t be able to prove anything, Mrs. DeBussi,” he said. “You just need to remain strong and insistent.”

They won’t be able to prove anything? What did that mean? That he suspected her—but didn’t blame her? She dared not ask him to clarify. Forcing a smile, she said, “Of course.”

If only “strong” felt like a possibility. She’d been strong once, even willful and rebellious. She regretted a great many things about those days, had been paying for her sins ever since. She considered living with Skip to be part of her penance. But the one attribute she’d lost that she wished she’d retained was her fighting spirit.

Maybe it was there, somewhere. But having a child completely disarmed her.