Read an Excerpt from Taking the Heat

Suddenly Gabrielle stopped. From where she stood, she could see part of the valley below. Tucker wasn’t in it, but a giant rock stood between her and a full panorama. He could be hurrying down the mountain beyond her sight, in which case she was losing valuable time. Or he could be standing behind the rock that obscured her view, in which case caution could save her life. 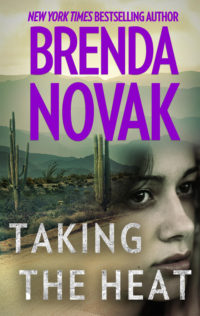 Her eyes scanned all they could see, but nothing, no movement, sight or sound gave him away. Pressing herself to the outcropping that could just as easily be providing him cover, she drew her gun. “Tucker? Are you there?”

No answer. She inched forward, craning her neck to see farther than a couple of feet at a time. “Tucker? I’m not here to hurt you. You know I’ll be as fair as possible. But what you’re doing isn’t right, and it isn’t safe.”

She stopped, listened. Nothing. Was he even there? She was probably making a fool of herself. “Come on, Tucker. We both know I have to take you in.”

The sound of some small rocks being dislodged came to her from farther down the mountain, and she let her breath go in relief. She was jittery, that’s all. He was hurrying on.

Shoving her Glock in her holster, she abandoned caution in favor of catching a glimpse of him before he could disappear again. But her forward motion was halted mid-stride when he tackled her, bringing her down hard on her left side.

The jolt of pain that accompanied her fall stole her breath as Randall Tucker landed on top of her. Blinking to clear the sudden spots from her eyes, she felt panic surge through her body like an electric current as he loomed over her.

“I’m afraid I’m going to have to object to a return trip,” he said, keeping her pinned beneath him while he relieved her of her gun.