Read an Excerpt from Sanctuary

Her mother’s hand dropped, and dread settled in the pit of Hope’s stomach as she looked up to see her father entering the park. A scowl generally served as his customary expression—anything less would have been too frivolous—but his face darkened considerably when a little girl ran up to him and brightly announced, “Her name’s Hope, Daddy. I heard her say it. Ain’t she pretty? Ain’t that a pretty name? Daddy?” 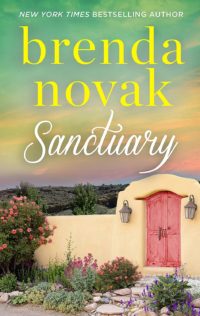 Her father passed the child without acknowledging her. Tall and imposing in an Abraham Lincoln sort of way, he still wore his beard untrimmed. Two gray streaks broke the black of it at each corner of his mouth, accentuating his frown. He’d lost a good deal of his hair; his face, on the other hand, hadn’t aged a bit. Time couldn’t soften his granite-like features any more than it could soften his granite-like heart.

“What is this? What’s going on here?” he cried, his long legs churning up the distance between them. Next to him hurried her two uncles, Rulon, a taller version of her father, who had eight wives at last count, and Arvin, the runt of the family—and the man she’d refused to marry. Almost skeletal in appearance, the bones of Arvin’s hips jutted out beneath a tightly cinched belt and his chest looked almost concave beneath his wrinkled white shirt. But at fifty-something, he still had his hair. Black and stringy, it fell almost to his shoulders. He was older than her father by a year, yet she would have been his tenth wife.

Hope’s grip on the flowers instinctively tightened until the prick of a tiny thorn she’d missed removing reminded her to ease off. She wanted to leave, but her feet wouldn’t carry her. Not while Charity was standing in front of her looking so haggard and careworn at twenty-three. Who had her father arranged for the sister closest to her in age to marry?

“Hope’s back,” her mother volunteered in a placating tone as Jed came upon them.

Her father’s eyes climbed Hope’s thin frame, the frame she had inherited from him. She knew he was taking stock of the changes in her, making special note of her khaki shorts and white cotton blouse. She was dressed like a Gentile, an outsider, and he wouldn’t like that, no more than he’d appreciate the fact that her apparel showed some leg. When she was in St. George, she’d considered wearing a dress, but putting on one he’d consider suitable seemed like too great a concession. She was one of these people, and yet she wasn’t. She was an outcast. As much as she missed her sisters and her mother, the years she’d spent here seemed like another lifetime. She now knew the freedom of making her own decisions, the power of education, the joy of being able to support herself. She lived in a world where women were equal to men. She could speak and be heard and have half a chance of making a difference.

That was what she wanted to give her sisters. A chance to know what she knew—that there were others in the world who believed differently than their father and that didn’t make them heathens. A chance to get more out of life.